Jennifer Aniston’s Latest Role Is All About Self-Care

The actress talks filming the Friends reunion, The Morning Show Season 2, and her health and beauty secrets.

It’s undeniable that 2021 has been incredibly busy for Jennifer Aniston so far. Not only was she completing work on The Morning Show Season 2, but she also shot the highly anticipated Friends reunion, which was every bit worth the wait. Now, for her latest endeavor, the actress is sharing her much-coveted health and wellness tips in her new role as chief creative officer of Vital Proteins.

From early romantic comedy roles like Nina Borowski in The Object of My Affection to her award-winning turn as Alex Levy on The Morning Show, Aniston has been a continual source of inspiration with a seemingly unflappable health and beauty regimen. The Murder Mystery star, who has been incorporating the brand’s collagen supplements into her daily routine for years, tells BAZAAR.com, “I noticed such a difference over a few months, and it’s just been a part of my everyday. And so, when Vital Proteins approached me to team up and become a part of their team, or just a fraction of their team, I was so super excited, because, yes, I actually know what I’m talking about.”

Ahead, Aniston talks about her new role with Vital Proteins, the upcoming season of The Morning Show, and what filming the Friends reunion was really like.

At the risk of embarrassing myself, I quoted you in my master’s thesis.
Oh, my God. I got quoted in your thesis? What was quote-worthy?

It was an interview you did when you said that if you were lying in the middle of the road and someone gave you a self-help book to tell you how not to lie in the middle of the road and get run over, you wouldn’t read it because that’s just not where you were at that moment. I thought that was great, because it was about just letting life come at you.
What a strange thing to say. But there was a time where I remember getting so many [self-help] books, and I was just like, “Can we stop, because I’m fine.” That’s very sweet. I’m very flattered and honored. 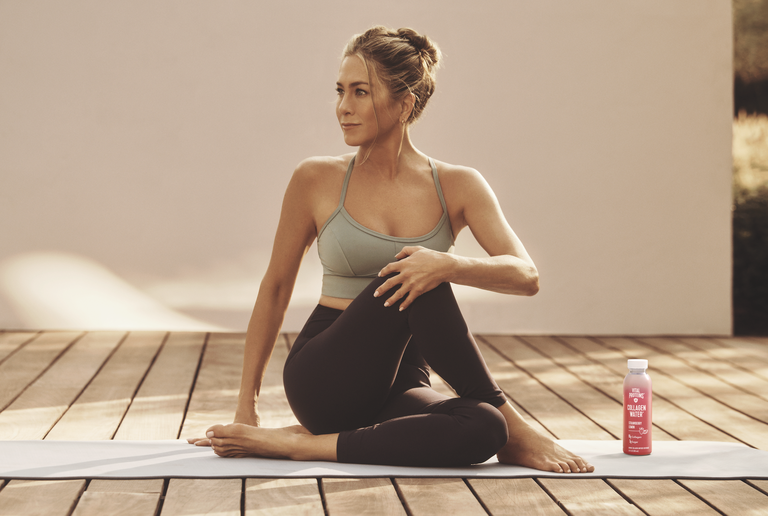 You’re very selective with the products you endorse. Why did you want to work with Vital Proteins?
Because it’s organic. That’s why I had been using it. It’s the only way I will partner up with a brand is if it feels like it’s organically coming out of my mouth, and I think that’s sort of been consistent throughout all the products that I’ve been a part of. My doctor told me about Vital Proteins in 2014 and said you need to incorporate this into your diet. And I was thinking, “How?” And he said, “Put it in your coffee.” And I go, “I’m a purist. I don’t mess up my coffee. Don’t you mess with my coffee!” And then sure enough, he goes, “But you won’t taste it. Put it in your smoothie.”

You’re now Vital Proteins’ chief creative officer. Do you have any plans in your role or anything you’re hoping to achieve?
I love participating with the group and to get into a think tank and come up with ideas to better the product, to expand the product. It’s been fun to come up with the campaign for it. The idea of that commercial was so much fun to come up with. Being a part of the creation of anything is my sweet spot.

[The role is] more just collaborating on ideas and what could be added to protein bars and into the collagen and ingredients. How do we make this more appealing? Or what if this tasted a little bit more like that? Just for creative ideas, but it’s a fancy title … CC … what’d they call it? CC … CCO.

You need to remember that.
I sure should. I’m going to get it tattooed somewhere.

We’re really excited about Season 2 of The Morning Show. What was it like filming in the pandemic?
Sorry that it took so long. What was that like during the pandemic? That was a challenge, to say the least. It was very hard. We were all a bit nervous to be going out there, even though we had an incredible epidemiology team to educate all of us on how this is going to work, how this is going to look, and testing and the protocols.

And it was challenging, because as artists and creatives, it’s all about human connection. And we were in masks while we were rehearsing, and then these shields, and I didn’t see my crew members’ faces, and we couldn’t say good morning with a hug. We couldn’t say goodbye with a hug. We’re all a very loving, tactile group of people, and it was strange.

You’d get the [COVID-positive] false alarms. … It’d have to shut down for an hour to find out who, and you contact trace, and all this stuff. When we shut down [production in March 2020], we’d shot almost two episodes. Then basically, the whole season had to be reimagined incorporating COVID into it, because it turns out our show is topical.

A very similar thing happened for our first season, because we had, I think, about five or eight outlines of the first season, and then #MeToo happened. So we had to go back to the drawing board. Season 1 was about abuse of power and sexism, ageism, and all of that stuff, and the sort of toxic environment that happens in the world of these shows, but #MeToo was such a huge piece [of that]. It’s like, “How do we not incorporate that?” So the same thing happened with Season 2. It took a lot longer than expected, and I hope it was worth the wait.

It sounds like you’re quite involved behind the scenes, and I know you’ve made short films in the past. Do you have any plans to direct again, in TV or film?
Yes. So funny that you mentioned that. I’m actually having a Zoom call tomorrow with a friend about directing a piece of material they found. And if there’s a Season 3 of The Morning Show, I want to direct one of our episodes.

I’d love to see you in a serious role opposite Adam Sandler, because I think your chemistry is so great together on-screen, and you’re both incredible when you do dramatic roles. So please do that.
Oh, my gosh. I’m going to tell him that, because isn’t he fabulous to watch as a serious actor? I just spoke to him the other day, because we’re working on Murder Mystery 2. So, unfortunately, you won’t get the serious one next. Because after The Morning Show Season 2, I need to make a comedy role. I’m done. I can’t cry and scream and rage anymore.

You need to be happy.

They’re such family, and they’re so embedded in my heart ’til the day I die.

So, the Friends reunion. Obviously, we all loved it. Do you have a favorite moment? And what was it like filming it?
Oh, it was full of emotions. It was a roller coaster of emotions. It was incredible. By the end of day two, we were all so giddy. I think the best part of it—there wasn’t one thing specifically—was just how instantly we fell right back into our roles of who we are to each other from that. … I mean, we’ve all seen each other on different occasions, but never in the same room together, except for back at my house. They’re such family, and they’re so embedded in my heart ’til the day I die. That was what was so special.

And that’s what made it so good to watch.
Yeah, thank you. So glad. Makes me so happy.

Jennifer Aniston Knows What She Wants

Welcome to Jennifer Aniston Online, your online fan source for Jennifer Aniston. Jennifer is probably best known for her role as Rachel Green in the hit NBC sitcom, Friends which ran for 10 seasons. You may also know her from her other roles in Picture Perfect, Along Came Polly, The Break-Up, Marley & Me, and Mother's Day. Here you will find news, information, photos, media and more! I hope that you like the site and please check back often for updates.
Current Projects
The Morning Show
An inside look at the lives of the people who help America wake up in the morning, exploring the unique challenges faced by the men and women who carry out this daily televised ritual.
Search JAO
Social Connect
Jennifer on Instagram @JenniferAniston